Everlasting-P by GADD Formulas claims to be an "all natural solution for prostate health". Everlasting-P is an interesting name for a prostate supplement. It seems to me that an "everlasting-p" is what we are all trying to avoid. No one wants to stand there and endure and everlasting-p! What a horrible experience! Anyways, this supplement is really new and we sent it to a third party lab to be analyzed. Now considering the history of the company behind this pill, how it is marketed, manufactured and advertised, it raises a lot of issues for our team here.

Let's take a closer look and see if we can decode what is going on here.

What's so odd is that Prostavox and Everlasting-P, the products rated #1 and #2 are both manufactured and owned by the same company and shipped from the same warehouse. Take a look at these" Who Is" reports: 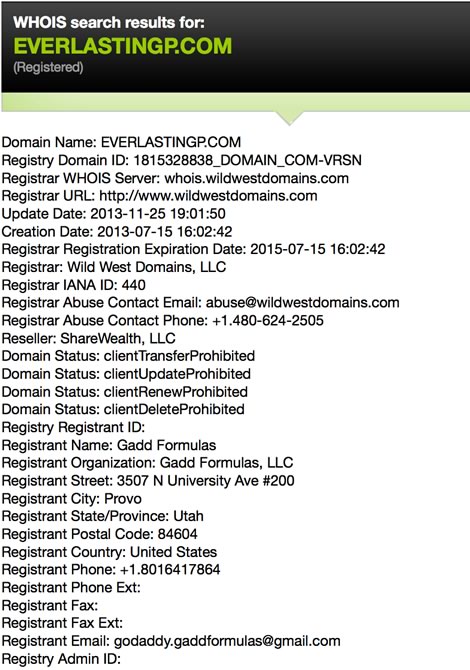 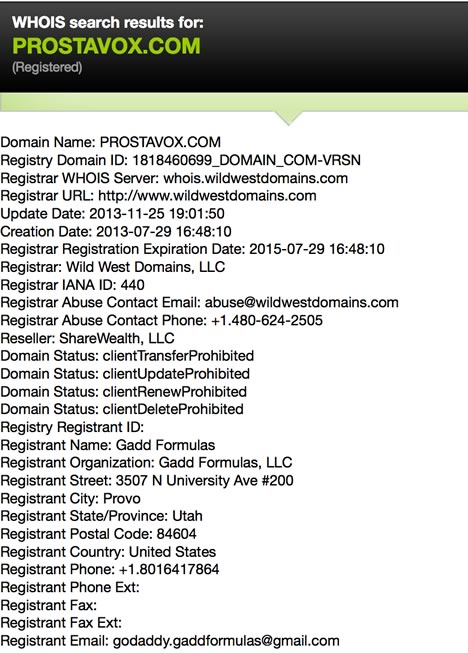 There's a lot of interesting things here: same company, same address, same phone number. Well, isn't ProstateHealthSupplements.com just an unbiased reseller? Hardly. You would think that they would at least disclose that they own the two "top rated" products that they are selling? Nope. No disclosure at all. You'd have to do a lot of research to make the connection. But here is the WhoIs report for ProstateHealthSupplements.com: 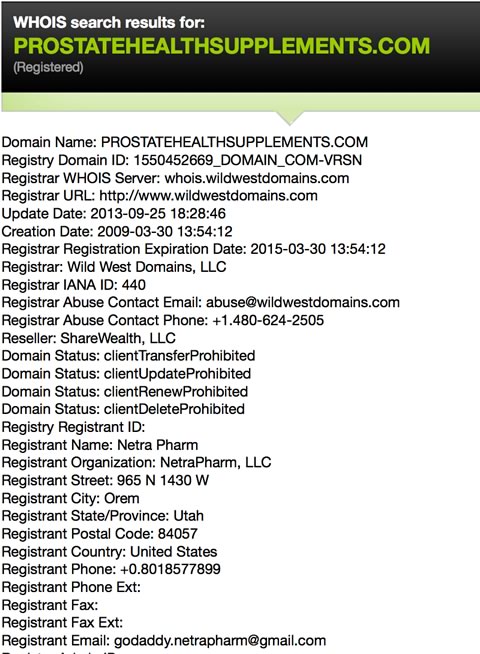 It might. Everlasting-P contains saw palmetto, which has been shown to reduce urinary symptoms caused by BPH in several studies. Saw palmetto is used as an alternative therapy for BPH in most European countries, but its use in the United States is limited due to the popularity of other prescription BPH drugs, such as Proscar. Its ability to fight BPH is proven, however--numerous men reported a decrease in urinary urges and pressure after undergoing saw palmetto therapy.

So what's wrong with Everlasting-P? The issue here isn't what they use, but if they can be trusted to use high quality ingredients in their products. Their ingredient label shows no indication of the quality of saw palmetto extract used. If it isn't shown then the assumption for me is that it is low quality. If it was a good extract, they would emphasize that. The same applies to its other ingredients--there is no indication to their quality and purity. This severely limits Everlasting-P's overall ability to reduce the symptoms of BPH. It's highly debatable if this supplement will have any impact on prostate health.

Although Everlasting-P contains several key ingredients shown to improve prostate health, it may utilize poor standardized extracts. Everlasting-P is misleading customers by not mentioning this fact on their website and also with their deceptive marketing practices. GADD Formulas also has a BBB Rating of an F. So a D- is definitely on par with what customers are reporting.